Some Cincinnatians argue for buses instead of streetcars. Buses have no effect on development.

Because a bus route can disappear overnight. Buses also seldom attract “riders from choice” with significant disposable incomes, which is what cities need economically. Rail transportation appeals to middle-class and upper-middle-class people, who have money to spend in stores, restaurants, and theatres. Streetcars, with their investments in tracks and wires, represent a commitment from the city to lasting, high-quality transit service, that developers can count on in the years to come.

While buses usually carry only the transit dependent, rail service can appeal to riders from choice – people who have cars and can drive, but who choose to ride transit instead. Most riders from choice represent a car removed from traffic, which benefits everyone, including the person who still drives.

In terms of economic development, streetcars are silk purses and buses are sows’ ears. You can’t make one into the other, not even through an unfunded federal mandate.

We’ll take the silk, thank you.

Why Streetcars, Why Now?

Cincinnati may have 300 feet of rail already laid in the ground for our streetcar project, yet some continue to question, “Why not build light rail or add more buses instead?”

Shelley Poticha and Gloria Ohland of Reconnecting America researched this inquiry, offering evidence contrasting streetcars from other forms of transportation:

WHY STREETCARS, WHY NOW?

Streetcar systems are uniquely suited to serve all the high density development underway in downtowns across the United States. They’re much cheaper than light rail, are hugely successful in promoting development and street life, and fit easily into built environments with little disruption to existing business, residents, and traffic.

They can provide high-quality transit service to support compact, walkable, higher-density development in small and mid-size cities that cannot afford bigger rail systems, offering the potential to significantly increase the constituency for transit in the United States.

Demographics are changing. American households are older and smaller. Singles, not families, are becoming the new majority. Combined with the problem of traffic, these changes are having a dramatic impact on the housing market, as evidenced by the renewed popularity of loft and condo projects in urban neighborhoods, many of them early streetcar suburbs such as the Central West End in St. Louis or Midtown Sacramento.

Almost every American city once had an extensive streetcar system which extended the pedestrian environment out into neighborhoods, served as collector for intercity rail systems, and stopped at every street corner to stimulate a density and intensity of uses that made for exemplary and engaging downtowns. If the high cost of providing parking drives development today, streetcars make it possible for developers to provide less parking and put their money into high quality design, building materials, and community benefits such as affordable housing and parks. Streetcars also enable more residents to give up a car, freeing up a substantial amount of money for other household expenses.

BUT…WHY NOT A BUS?

Fixed guideway transit, such as streetcars, attract more riders and serves as a greater catalyst to development than buses. Developers need the permanence of the rail investment to help reduce risk.

Fixed rail is easier to understand because potential riders see the rails in the street and know a streetcar will come by, whereas bus riders need a schedule and route map, and routes are often changed.

Streetcars and the higher quality service they provide appeal to a wider demographic range of riders, which translates into greater support and ridership.

Streetcars signify the local government’s interest in a long-term commitment to a neighborhood, which helps stimulate and enhance development and redevelopment.

Let’s Grow: Streetcars and Your Neighborhood

A frequently asked question about the Cincinnati streetcar is, “When is it coming to my neighborhood?”

Currently, the City of Cincinnati is focused on building the current 3.6 mile loop around the Central Business District and Over-The-Rhine, where the most employers and revenue-generating entertainment is located. The next phase of the streetcar is expected to travel north on Vine Street to Uptown, Corryville, and Clifton.

But then where will it go?

It’s hard to say, as the City of Cincinnati is only 30% into its research on planning the Uptown phase. In the meantime, a University of Cincinnati student earning his Masters of Architecture outlined a longer streetcar route for an academic project. The design for this theoretical streetcar route is based on the current streetcar route, the 2002 Metro Moves light rail initiative developed by the Southwest Ohio Regional Transit Authority, and the 2030 Regional Transportation Plan unanimously adopted in 2008 by the OKI Regional Council of Governments.

The light green route represents the streetcar line, and its possibility to expand outward to such neighborhoods as Westwood, Price Hill, and Camp Washington on the west side, northward to Avondale and Northside, and encompass Walnut Hills, Oakley, and Columbia-Tusculum on the east side. The academic project, entitled Metro|Cincinnati, also includes route projections for commuter rail, heavy rail (such as a subway), and extensions into Northern Kentucky. 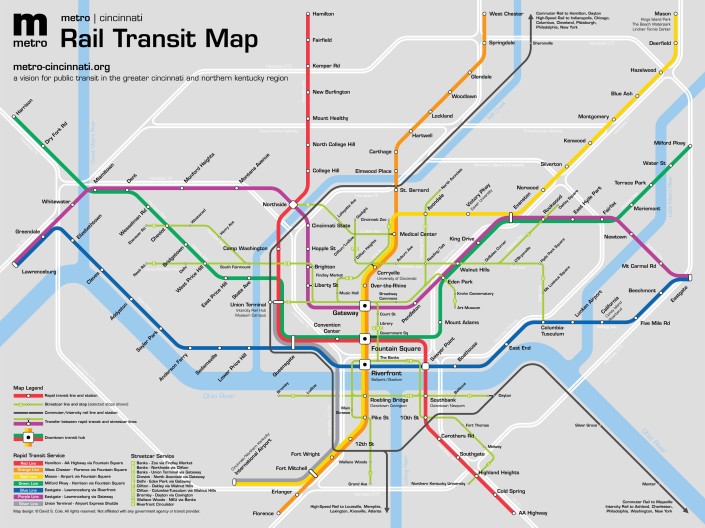 While it will be up to the city to chart the course of the streetcar to its next neighborhood, it’s likely that it will be one or more of the communities highlighted on the Metro|Cincinnati map.

Studies and Reports on the Cincinnati Streetcar

There have been numerous studies, presentations, and reports on the Cincinnati Streetcar that explain why streetcars are good investment for the City of Cincinnati.  Here are the links to these documents:

Growth and Opportunities Study of the City of  Cincinnati (pg. 61)

Over The Rhine Green Preservation Study

Letters of Support for the Streetcar 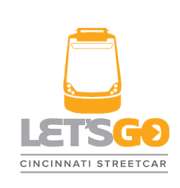